From the advent of the nineties, it has become simpler for new DJ’s to grasp the techniques of beat mix. This has been facilitated by present dance tracks possessing lengthy intros, stoppages and effects having precisely synchronized computer produced beats, without any live drummer. But the magic of vinyl records with classic turntables is not present in this modern equipment.

In modern times, beat mixing skill uses different turntables, either with accompanying CD players or only CD player tracks along with a mixer which synthesizes pre-recorded audios while sustaining a regular beat. Since a DJ is able to integrate tracks in an innovative way by extracting the vocal or instrument-less accompaniment of a particular track and super-impose it with the pitch of an entirely different track, the DJ can generate recent and rare versions of preceding songs.

A qualified DJ stands apart from an amateur in expertise of equipment, with comprehensive and state-of-the-art gadgets for DJ needing a good deal of practice by a lay person to acquire the skills for performing in club. Turntables is and will ever be the starting point of any DJ , being heart plus soul of Disk Jockey’s art. CD players though great, yet nothing can beat the magic of vinyl. 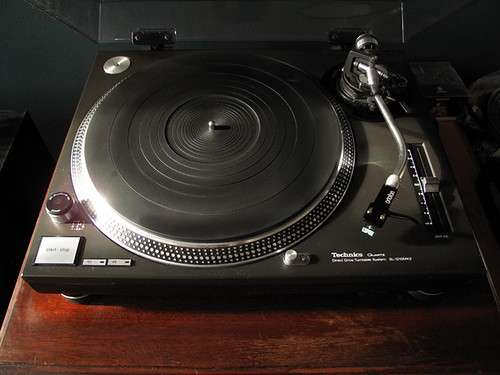 Technics SL-1200: The Icon
Since its release of the original Technics SL-1200 in 1972 an then an updated version the SL-1200MKII in 1978 these turntables have been the popular and regarded turntables famong DJ’s. Producers, DJs & Rap MCs. Among turntables, Technics SL-1200MK2 with its subsequent versions like MK5 and MK5G continues to be the industry benchmark prevailing in many clubs. Apart from their iconic status in hip-hop and electronic music culture, Technics 1200s are also commonly used in recording studios and for non-electronic live music performance. Since 1972, more than 3 million units have been sold. This is attributed to the turntable’s prime build quality plus supreme durability: an assortment of 1200s manufactured in the seventies is being utilized even now. In the autumn of 2010, Panasonic announced that the series was to be discontinued due to marketplace conditions

While playing records, altering the pace of tracks is vital to continue the moving of the dance floor. The tempo of one record may be adjusted to correspond with another and permit the overlapping of rhythmical segments like drums plus bass. This pitch modification of the pace, known as BPM, can be achieved on a progressive turn table, like the most famous of all the Technics SL-1200. Since its introduction, the direct drive turntable improved DJ performance, compared to belt drive ones and renders beat mixing as way simpler. If a person’s budget is restricted, then we suggest to buy new “imitations” of the Technics 1200 like the Audio Technica AT-LP1240 USB .